Maha Sarakham Province is roughly in the center of the Northeast or Isan Region of Thailand. Mahasarakham city is the capital of the province. It is about 470 kilometers from Bangkok. 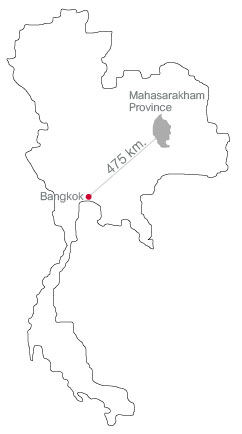 Several bus companies run comfortable air-conditioned buses between Bangkok’s north-eastern bus terminal at Mo Chit and Mahasarakham. The trip takes about seven hours. Refreshments are served on board and the bus stops for a meal at an appropriate time. To return to Bangkok a bus can be boarded at the Mahasarakham bus station or from the Rungprasert bus terminal behind Serm Thai in Pangmuangbanchaa Road.

Thai Airways have three flights a day between Bangkok and Khon Kaen which is 75 kilometers from Mahasarakham. You can hire a tuk tuk or taxi to take you to the Khon Kaen bus station where you can catch the pink bus to Mahasarakham

Air Asia operate daily flights between Bangkok and Roi Et which is 40 kms from Mahasarakham. The airport at Roi Et is 18 kms from Roi Et city. There is normally a car for hire available to take you in to Roi Et bus station where you can catch the pink bus to Mahasarakham.

For travelers who like the idea of an overnight train trip, a train with sleeper carriages runs from Bangkok to Khon Kaen. Once again a tuk tuk is needed to get to the bus station where a bus will bring you the rest of the way to Mahasarakham.

The pink bus service runs regularly between Roi Et – Mahasarakham – Khon Kaen and operates between the hours of 5.30 am to 7.30 pm.

The original campus is commonly known as the old campus (mor gao). It is close to the central area of Mahasarakham city and houses the following faculties and facilities: Faculty of Education, Faculty of Medicine, Faculty of Tourism and Hotel Management, Faculty of Environment and Resource Studies, Faculty of Veterinary Medicine and Animal Science and the Satit Demonstration Primary (Elementary) School.

TRAVELLING BETWEEN THE CAMPUSES

If you’re on Khamriang Campus and you need to go downtown or to the old campus, the easiest way is to catch a baht bus (songthaew).Stand by the side of the road and flag them down by extending your hand at waist level and moving it up and down.Use the buzzer to alert the driver when you want to get off. Cost is 8 baht no matter how far you go. You pay the driver when you get off. Both blue and yellow songthaews operate seven days a week from 6.00 am and 8.30 pm from near MSU Plaza (38), turning left at the Taakonyaang-Khamriang Road intersection then heading either to the downtown bus station or the old campus.

Blue songthaews operate on a continuous circular route starting on the canal side outside MSU Plaza (38). They travel to and turn around at the downtown bus station before returning to MSU Plaza.

Note: Some blue songthaews from MSU Plaza turn right out of the ring road and travel into Khamriang. Drivers are astute and will normally indicate to you if they are heading the ‘other’ way.

Yellow songthaews also operate on a continuous circular route starting on the canal side near MSU Plaza (38). They travel to the old campus, entering at the MSU Business School classrooms (12). They then do a clockwise lap (i.e. past buildings 12, 32, 41, 47, 21, 12) of the old campus before returning to MSU Plaza on the new campus.

Campus trams are a free service for students and operate on the new campus. They travel a continuous lap of the campus and operate during normal university session times and hours. 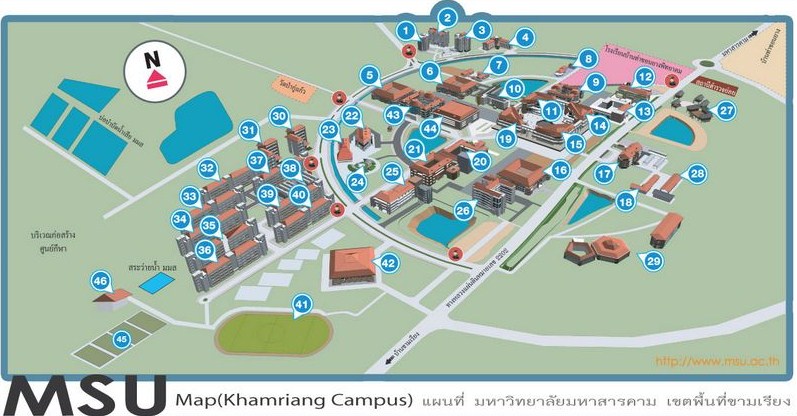